PNAA presents this award to an individual, company or organization to honor their outstanding accomplishments which have significantly contributed to the support, growth and future of the aerospace industry, throughout the greater Pacific Northwest. 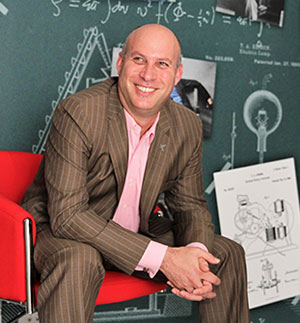 Roei Ganzarski’s electric propulsion technology company, magniX, is poised to disrupt the aerospace & defense industry with advanced technology that will enable transportation capabilities and services never possible before. "Since the introduction of the jet engine in 1939 with the Heinkel, the aviation industry has been stagnant seeing little to no step change innovation – until now,” Ganzanski says.  “Today, we are on the cusp of a seismic shift with the promise of full electric flight which will have positive implications on operating costs, flight frequency, connectivity, noise, and the environment."

As the push for creative innovation continues to be part of strategic planning for suppliers across the globe, Ganzarski’s unorthodox way of thinking is exactly what we need to help the industry continue its upward trajectory, said PNAA’s Chairwoman Nikki Malcom.  “I had the pleasure of meeting Roei at PNAA’s first ever NExT event for new and expanding technologies,” she said.  “He spoke on multiple panels for the event and offered some great insight on how we have to change our thoughts and actions to move into this next phase of the industry.  Roei is a veteran CEO, with over 20 years as an aviation executive.  He is always open and willing to have a discussion with everyone.  He has amazing foresight and is incredibly approachable.  This is what inspired me to award him with the Chairwoman’s award,” Malcom said.

Ganzarski, a graduate of Wharton’s Advanced Management Program, has led the magniX team through some exciting accomplishments over the last 12 months – completing over 1,000 hours of testing on electric motors turning aircraft propellers on magniX’s Cessna Caravan iron bird.   “Most recently we disconnected our iron bird system ‘from the wall’ and began full system testing on battery power only.  We are excited about what we plan on doing in 2019.” he said.

This all-electric propulsion system could replace turboprop engines on existing 6-20 seat planes such as the Cessna Caravan, Beechcraft King Air or Viking Twin Otter.  Ganzarski says, “magniX’s motor should cost roughly the same as the venerable Pratt & Whitney PT6 engines it would replace, while improving operating costs on the order of 40% to 60%.  This technology could significantly improve the costs to fly regionally.”

Imagine a world where your life journey includes access to short flights across the country for a fraction of the cost.  Would you travel more experiencing your larger community?  Imagine your work commute spanning great distances, but in less time than it takes you to travel to your neighboring city.  Would your work day be more productive and efficient?  Lastly, imagine booking a flight like you book an Uber or Lyft now, flying out of the many regional airports scattered across the country and globe.  Would you be more spontaneous?  This is the world Ganzarski and magniX are working to provide for our future.

Originally from Israel, Ganzarski came to the US to earn an MBA from the University of Washington.  He was a Chief Customer Officer for Boeing’s Flight Services division where he led all worldwide customer and market-facing organizations and was responsible for revenue growth and customer service.  He later became the CEO of BoldIQ a global provider of dynamic real-time scheduling optimization software.  Under his leadership, BoldIQ grew from a seed software startup to a multi-million-dollar profitable SaaS company with customers worldwide and across industries.  Today, as CEO of magniX, Ganzarski sits on the board of Washington Technology Industry Association.