PNAA’s Executive of the Year Award is presented to an executive of an aerospace company located within the Pacific Northwest who has made a significant contribution to the advancement of the Pacific Norwest Aerospace Industry.

The Lighthouse for the Blind, Inc. 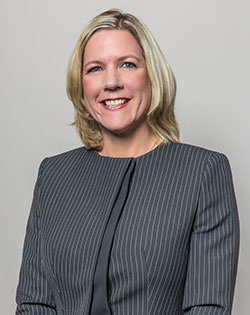 As the first female President & CEO under 50 in the nation who is legally blind, Cindy Watson is blazing a trail for people with disabilities in aerospace.

With a career that spans across two decades in organizations with both a business and social mission, Cindy was promoted in April 2015 from Senior Vice President to President and CEO of the 100-year-old enterprise, The Lighthouse for the Blind, Inc.

A private not-for-profit, the Lighthouse employs roughly 500 people, 270 of whom are blind, DeafBlind, or blind with other disabilities.  These employees make aerospace parts, office products, and myriad other machined products for customers such as The Boeing Company and the federal government. They also provide managed services, including appointment setting, quality assurance, account reconciliation, contract close out, and other administrative services for customers such as the U.S. Navy and the Defense Contract Management Agency.

“The continued growth in meaningful jobs for people who are blind, the expansion of The Lighthouse footprint into new communities, the steady increase in revenue to provide higher wages, and expanded training and development at The Lighthouse is inspiring to all of us at our organization.” said Cindy, “I believe these accomplishments will encourage our customers, donors, and community partners to help us lead the way in providing sustainable jobs during this next decade of progress.”

Cindy earned her MBA in Business Administration from the University of Houston-Clear Lake. She was also a fellow at the National Industries for the Blind (NIB) and provided teaching, counseling, and employment assistance for the Texas Department of Assistive and Rehabilitative Services - Blind Division.

Previous to her work in Texas, Cindy worked at Winston-Salem Industries for the Blind as their Director of Contract Services from 2010 to 2015. She also led the American Foundation for the Blind’s (AFB) Center on Vision Loss and Web Programs and served on the Board of Trustees in Dallas. Prior to accepting a position at The Lighthouse as Senior Vice President, she was Vice President of Services at Dallas Lighthouse for the Blind.

Throughout her career, Cindy has dedicated herself to empowering, advocating, and creating pathways to employment for people who are blind.