Aerospace Company located in the Pacific NW that has exhibited exceptional organizational and managerial and management characteristics while continually maintaining a strong competitive posture, thus raising the industry standard for the Pacific NW. 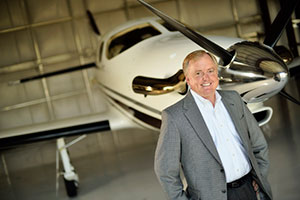 On November 6th, 2019, Epic Aircraft announced the FAA granted Type Certification to its E1000 clean sheet all carbon fiber aircraft design. They met these requirements, without compromising performance expectations, especially given the higher FAA standards for composite versus metal designs. This concluded a rigorous seven-year program that established a new industry standard for performance, price and ramp appeal in the personal aircraft marketplace. The E1000 is the fastest, highest performing, most affordable and comfortable, six-place single-engine turboprop in the world.

“Epic is a marvelous example of a company with a dream, who builds a winning team around that dream,” said PNAA Board Member JC Hall. “It harnessed the knowledge and workforce development infrastructure that was fostered in the 1990’s Bend area, and rose up to create a high-performance business aircraft that competes with business jets, but operates more economically.”

Headquartered in Bend, Oregon, Epic Aircraft is a design-driven aviation company that conducts all its engineering and manufacturing operations in the United States. In 2004, it began redefining the rules of aviation when it debuted its first experimental aircraft, the Epic LT. Its artful combination of turbine power, composite technology, advanced avionics and unforgettable luxury, packaged in a sleek, elegant airframe, caused the aviation industry to take notice. And they didn’t stop there. Today, with over 300 full time staff, it successfully applied the collective knowledge and experience gained from jointly building over 50 Epic LT ‘kits’ toward the E1000 certification.

Epic is currently guided by Doug King, himself a former Epic LT owner. In March of 2012, Epic Aircraft was purchased by a private investor who agreed to fund the company’s type certification program. Doug assumed the role of CEO, bringing his successful business experience and passion for aviation to Epic. Prior to joining the company, he owned several highly successful transaction processing and computer services businesses in Southern California. He was instrumental in revitalizing the operations of Syncro Aircraft in Van Nuys, California, a premier business jet refurbishment center on the west coast that specializes in Gulfstream, Learjet, Hawker, Boeing and Falcon aircraft.

His leadership resolutely guided the company’s E1000 certification efforts toward a successful conclusion in November. “We have a great team and great partners, who have worked tirelessly to achieve E1000 certification. We have a dedicated and passionate owner, whose belief in the program and product never wavered,” said King. “We have recruited the necessary resources, knowledge, and experience to support certification and production of this game-changing design. We are confident in our ability to deliver an aircraft that will redefine industry expectations.”