PNAA’s Inspire Award honors businesses and individuals in the aerospace community that have shown exceptional creativity in working with schools to share the activities of manufacturing in an overall effort to cultivate interest and skills leading to aerospace careers. 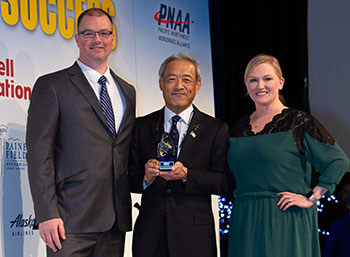 In 2008, the company was established in Washington State to provide research, development, and sales and marketing support for the MRJ program.  The company’s goal was to deliver and type certify the MRJ, a family of 70-90 seat next-generation regional jets that offer top-class operational economy and outstanding cabin comfort.  The company opened its headquarters and engineering offices in Seattle in 2015, its flight test center in Moses Lake in 2016, and other offices across the country focusing on sales and program vendor management a short time later.

As the first MRJ flight test aircraft (FTA) from Japan arrived in 2016 for testing in the US, it was clear that Mitsubishi Aircraft Corporation America wanted to make a lasting impression on the communities it called home.  As the local communities worked to help the company fulfil its business mission, the company began to show its appreciation by promoting STEM (Science, Technology, Education, and Mathematics) education and careers in the region.

“Mitsubishi Aircraft Corporation America came to my attention as I was talking with educators.  They enthusiastically mentioned the outreach and partnering that had occurred with Mitsubishi Aircraft Corporation America, students and the technical school,” said PNAA’s CEO Melanie Jordan.  “I am inspired to facilitate more STEM connections when I hear of great examples of outreach and experiential learning.  Never knowing what might spark a career interest, exposure to any portion of the multi-faceted business of aerospace helps fill the skilled workforce pipeline for the entire industry.”

Although the company is relatively new to Washington State, Mitsubishi Aircraft Corporation America already shown its dedication to supporting STEM education and interest in aerospace careers through collaboration with local educators, business, partners and Washington STEM groups.  Eight months after the first flight test aircraft’s arrival at the company testing facility in Moses Lake, Mitsubishi Aircraft launched its first educational STEM event with Reach for the Stars with STEM in 2017.  Hosted by Big Bend Community College and the Port of Moses Lake, the Mitsubishi Aircraft-sponsored event welcomed 600 ninth grade students from the local high school to learn about STEM careers from aerospace professionals, including a retired NASA astronaut, and explore a Life Flight helicopter, firetrucks, and an MRJ flight test aircraft.  In conjunction with the event, two high school students won a fully sponsored week-long visit to advanced Space Camp in Huntsville, Alabama.

Today, Mitsubishi Aircraft continues to work with local partners and Moses Lake schools to contribute to local STEM education and awareness of aviation career opportunities.  The company has established four $2,500 scholarships at the local community college, three in aviation maintenance and one at the pilot school.  The company’s flight test pilots and mechanics attend Moses Lake career events and job fairs to explain their trades and job opportunities in aviation to local students.