PNAA’s Executive of the Year Award is presented to an executive of an aerospace company located within the Pacific Northwest who has made a significant contribution to the advancement of the Pacific Norwest Aerospace Industry. 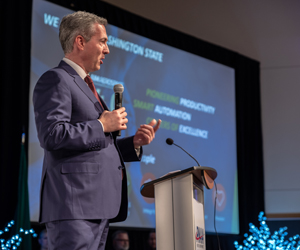 Within months of becoming President and CEO of AIM Aerospace in 2017, Daniele Cagnatel, a visionary leader with impressive business instincts, knew exactly where the company needed to go to make its mark in the industry.  He announced that big changes were coming because the market around AIM Aerospace was changing at a record pace.

In the last year and a half, a wave of big changes has washed over AIM Aerospace as they acquired Quatro Composites, a supplier of highly engineered advanced composite structures, components and assemblies with sites located in both California and Iowa.  Now supplying several leading aerospace platforms including Boeing, Gulfstream and Insitu as well as the medical and industrial markets, AIM Aerospace is poised for growth.  Under Cagnatel’s leadership, their future includes new composite and thermoplastic market segments and the delivery of new generation complex products to meeting ever-increasing customer demand.

While Cagnatel is phenomenal at setting strategic visions, those things don’t happen without the engagement and buy-in of the people he is leading as well as the inspiration of his leadership team.  He truly cares about doing the right thing for his employees in all facets: from healthcare premiums that are aligned with employee wages to visiting all sites on a regular cadence to share the state of the business and answer questions.  He understands the importance of leadership and takes time to not only meet with future company leaders, but to also truly understand their passions, strengths and weaknesses to help develop them with a tailored approach.  “We are breaking down management to create a company where everyone feels part of AIM Aerospace,” Cagnatel says.  “We are creating that buzz and momentum all the way down to the shop floor.”

“Daniele is a remarkable leader who is already proving to take AIM Aerospace to new heights, starting with the consolidation/optimization of its South Puget Sound facilities,” says PNAA Board Member Amandine Crabtree. “His leadership and vision make him an excellent choice for Aerospace Executive of the Year.”

Cagnatel demonstrates dedicated Executive Leadership by leading AIM Aerospace's business strategy into the future while achieving and maintaining an unequaled level of performance and customer satisfaction.  In addition to optimizing its South Puget Sound facilities, he has collaborated with the State of Washington to invest in the company, brought additional innovation at their facilities and diversified their business not only geographically but with advanced capabilities in the fastest growing sector within the composite segment.  From his first position at GKN, Cagnatel has a proven record of leadership for over 19 years.

Cagnatel explains, “The future of aerospace, in my view, is the fundamental digitalization of the supply chain.  Aerospace is still very conservative, and the level of digitalization is very low compared to other industries.  A huge amount of overhead is spent because we still do things the old, manual way. . . Over the next five to six years, having a digitalized company is going to be very important and a competitive discriminator for AIM Aerospace.”