PNAA’s Chairwoman’s Award is presented to an individual, company or organization to honor their outstanding accomplishments which have significantly contributed to the support, growth and future of the aerospace industry, throughout the greater Pacific Northwest. 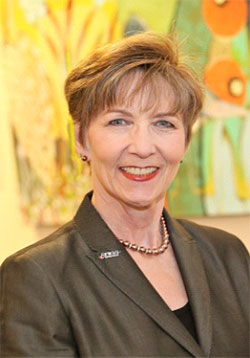 Melanie Jordan served PNAA in progressive leadership roles beginning in 2007 as a member of the Board of Directors, then as Executive Director (2013), Chief Operating Officer (2014) and CEO (2016) retiring with the honorary title of CEO Emeritus in 2019.

Under her leadership, and with the strategies for growth determined by the Board of Directors, PNAA became the Pacific Northwest region’s premier aerospace trade organization focused on the mission of promoting the growth and global competitiveness of the Pacific Northwest Aerospace Cluster.

She grew up in Renton in the 1960s and entered the workforce at a time of significant economic distress. “Would the last person leaving Seattle - turn out the lights” was the iconic billboard that reflected the mood of the region, and with 17% unemployment, jobs were scarce.

Young and enthusiastic, Melanie was undaunted and began her search for work with an idea – Start at “A” in the yellow pages; cold call every company asking for a job until you get a “Yes.” Dozens of calls, then Bingo! A small startup airline needed to set up an office and Melanie had the skills. Once organized, she focused on flight operations, where she thrived, and her career in aviation was launched.

Over the next several years, Melanie worked in flight operations at a global non-scheduled airline (B707) and then a regional air carrier (B737). She later transferred her knowledge and skills to a variety of specialized jobs in aviation including: the FAA, airport management, aviation land use and advisor to flying museum Historic Flight. In 2003 she joined with the leadership team in the planning and development of the Future of Flight Aviation Center & Boeing Tour, serving as Founding President and Chair of the Foundation.

Years later, with her interest in aerospace piqued and wanting to learn more, she attended: PNAA’s 6th Annual Aerospace Conference. Thoroughly impressed with the world-class speakers, she noticed attendance was sparse and had an idea. “Let me assist you with bringing in a larger audience,” she pitched the Board. Wanting to grow the organization, but not having the bandwidth, they struck a deal for services.

“As is the case with the success of any organization, it takes a team,” noted PNAA’s Vice Chair, John Graham. “In PNAA's case, Melanie Jordan was the exceptional team leader responsible for revitalizing PNAA and helping it to become the largest and most impactful aerospace alliance in the world. She has an exceptional ability to work within all factions of the aerospace community and used this skill to lay the foundation for PNAA's current success.”

With unique, effective and relevant events facilitating engagement between PNAA’s members, suppliers, sponsors, partners and key aerospace stakeholders locally and globally, the industry was receptive. Year after year growth ensued and PNAA became recognized as the destination organization for aerospace manufacturers to learn the latest market intelligence, trends, and analytics, as well as network with peer decision makers. “Under Melanie’s leadership PNAA broadened its reach,” stated PNAA’s Chairwoman, Nikki Malcom, “CEO Roundtables, Women in Aerospace, Oktoberfest, Executive Briefings, scholarship funding, international agreements and more. A mentor to many, consistently modeling professionalism, enthusiastic about STEM education, always the optimist and sharing her passion for aviation and aerospace, Melanie has set the standard for others to follow.”

In retirement, she’s looking forward to traveling with her sweetheart, visiting her son at UC Berkeley and writing a book of family history with her mother. A dedicated aviation/aerospace enthusiast, she will continue offering strategic insights on the industry through Aerospace Liaison Services as a consultant.